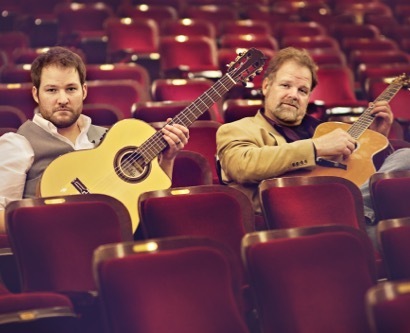 A unique father and son instrumental collaboration creating intricate, flowing & rhythmic sonic weavings inspired by Latin, Jazz and World Music. A duo since 2009, Jerry and Ryan’s have been astounding audiences across the midwest with their exquisite original compositions and superb musicianship.

What people are saying about Younce Guitar Duo

“Their sets are always so beautifully crafted with intricate melodies that create an intimate experience. Their warm, soulful sound is always accessible and consistently strong and energetic.” John Dow Williams, Owner of Johnny’s Speakeasy, Ann Arbor

Before joining forces in 2009, both Ryan and Jerry had been active in the Michigan music scene. Jerry was born in Detroit in 1960, and as a teenager had become an active player in Detroits burgeoning jazz scene. Enthralled with the music, he pursued Jazz Studies at Wayne State University, and guitar under the direction of jazz guitarist William Leavitt at the Berklee College of Music. Well versed in variety of musical genres, including, jazz, country, big band and rock, Jerry performed with dozens of midwestern bands and singers before embarking on a career in business. Now focused solely on music, Jerry is delighted to perform with his youngest son, I have a great time playing with Ryan. Our ability to read each other and understand where we are going with a piece of music and interact and play with each other is really special. The Duo schedules approximately 150 performance dates per year.

It should come as no surprise, growing up surrounded by his fathers guitar playing and love of music, that Ryan would inherit Jerry’s enthusiasm. Early on, Ryan and his older brother began to play in an indie rock band, and then later formed the alternative rock band, Escanaba Firing Line, in 2002. When Ryan and Jerry formed the Younce Guitar Duo they discovered that their different musical backgrounds and approaches were complimentary.