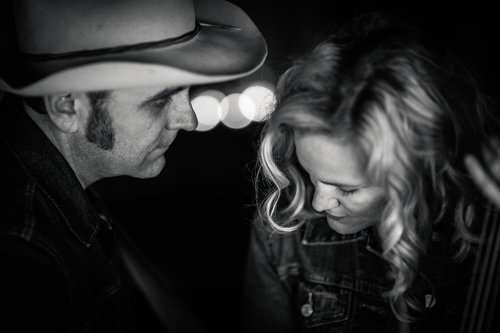 Although they’re based in Nashville, Wild Ponies have always looked to Southwest Virginia — where bandmates Doug and Telisha Williams were both born and raised — for inspiration. There, in mountain towns like Galax, old-time American music continues to thrive, supported by a community of fiddlers, flat-pickers, and fans.

Wild Ponies pay tribute to that powerful music and rugged landscape with 2017’s Galax, a stripped-back album that nods to the band’s history while still pushing forward. Doug and Telisha took some of their favorite musicians from Nashville (Fats Kaplin, Will Kimbrough, Neilson Hubbard and Audrey Spillman) and met up with revered Old-Time players from Galax, Virginia (Snake Smith, Kyle Dean Smith, and Kilby Spencer). Recorded in the shed behind Doug’s old family farm in the Appalachians (steps away from the site where Doug and Telisha were married), it returns Wild Ponies to their musical and geographic roots.

Growing up, a young Doug Williams spent many an hour watching and learning as his grandfather played banjo alongside local musical legends like Snake and Kyle Dean. Although both of his grandparents have now passed away, they would surely be proud to see Doug and Telisha gathered in the shed with Snake, Kyle Dean, Kilby, and a diverse handful of the best musicians from Nashville. The result is a broad, bold approach to Appalachian music, created by a multi-cultural band whose members span several generations.

Todd Albright is a country blues, twelve string guitar player and vocalist based in Detroit, Michigan. Grounded in the pre-war era of the blues tradition (1880-1939), Todd is a mindful purveyor of blues history. His repertoire upholds musical pillars such as Blind Willie McTell, George Carter, Blind Lemon Jefferson and Leadbelly. His life’s work continues the distinguished tradition of the very roots of American music as told by the African American musicians who created it.

Todd’s vigorous, gritty and soulful performances are accompanied by stories of the masters and a deep intuitive sense of respect for craft, providing audiences with a meaningful experience while creating a transcendent moment. One of the top blues guitarists in the world, Todd is the only contemporary twelve string player in his genre.

Todd began playing the blues while still a teenager, some twenty-five years ago. Initially, he was drawn to the sound of the finger-picked style and has since immersed himself in the foundational music and narratives of American culture. Over the years, Todd has shared the stage with artists such as Roy Book Binder, Charlie Parr, Paul Geremia, and Dakota Dave Hull.