Trinity House in the Round w/ Tom Alter, Sodra and Greg Poulos 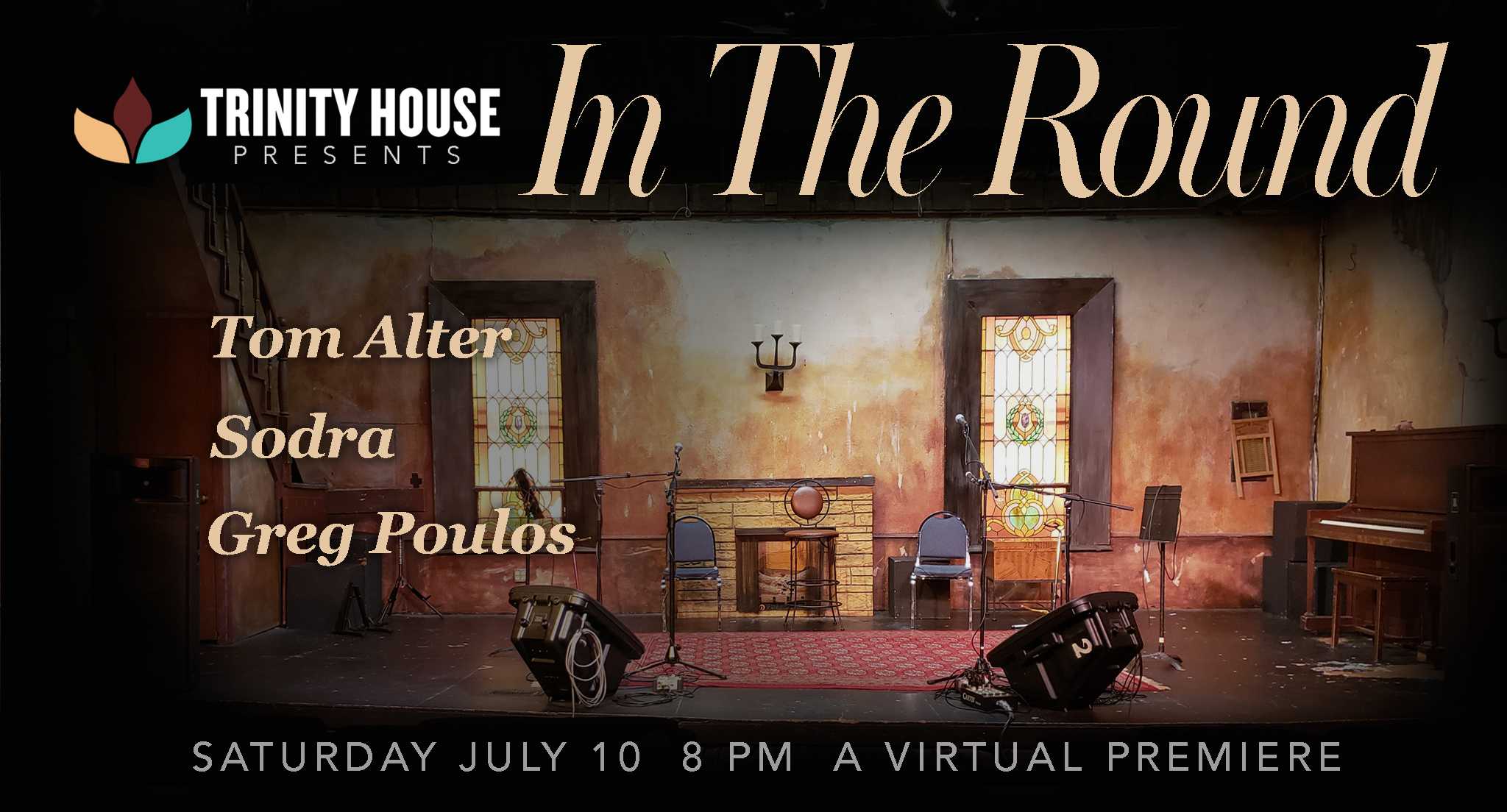 Our Trinity House In the Round Virtual Concert returns for round 4 with Tom Alter, Sodra and Greg Poulos.
Sodra is originally from Granville, Massachusetts where she grew up beside wildflower-lined roads off Route 57, an area known for its gorge, icicle encrusted cliffs, woods with reservoirs and waterfalls, and long distance bikers inching up its winding inclines. The town still has one general store known for the cheddar cheese, and a harvest fair every fall where the Ladies Aid Society sells handmade quilts and the Fire Department sizzles up Fried Dough and cooks fresh venison on the grill.
She learned to sing harmonies at church, sang Disney songs and Broadway musicals with her siblings at home, and took some guitar lessons when her dad owned a music store. She began writing music when I realized a few chords could make a song. She has a BFA in printmaking from Massachusetts College of Art and In 2008 she moved to Michigan where she completed my MFA in painting at Cranbrook Academy of Art.
During this wild year of 2020 Sodra stayed inspired by the new work of Jon Batiste, Norah Jones and Bob Dylan. She’s also working with longtime Detroit musician and producer, Dave Lawson, on new music.
Greg Poulos has been playing music most of his life. He played in several folk-rock bands in the early 90’s that toured throughout Michigan,
and also formed the bluegrass band Catfish Gracie in the late 90’s (where he performed as Elmer Gracie, his alter ego). The popular band Greensky Bluegrass has cited Catfish Gracie as an early influence. Even though Catfish Gracie was not well known, Grateful Dead lyricist Robert Hunter was a fan as he and Greg corresponded regularly via email.
Greg played as a solo act in the early 2000’s and has written and recorded several albums of original songs some of which have been recorded by other bands such as the The Hummingbirds. In recent years, Greg primarily writes and records at home and raises his
young children with his wife.
Tom Alter is a Michigan based songwriter, singer, and guitarist. Since picking up his first guitar at the age of eight, Tom has been influenced by a wide range of musical genres. Listening to his recordings, you encounter the sounds of pop, jazz, latin, country, and r&b, mixed into his alternative folk catalog.
​
Tom’s musical influences are evident in his songs. Pop and rock influences include the Beatles, Wilco, Death Cab for Cutie, Jack Johnson and New Order. Tom’s guitar heroes include Pat Metheny, Joe Pass, Wes Montgomery and Mark Knopfler. He also writes songs with a nod to the bossa nova composer Antonio Carlos Jobim.
​
His 2019 album “Notes from the Lesser Middle” reflects on the political climate in the United States, calling for a renewed sense of community and dialogue. This release was followed by EPs released in 2019 and 2020 titled “Passage from the Lesser Middle” and “Wading in the Lesser Middle.” These EPs cover a variety of topics from literature to climate change, from Hank Williams to former major league pitcher Dock Ellis, and from psychic mediums to the innocent victims of war.
​
And in 2021, inspired by the events of 2020, Tom released the album “One Year in the Lesser Middle,” featuring songs about the pandemic, politics, the quest for equal rights, and events in his personal life.
+ Google Calendar+ iCal Export