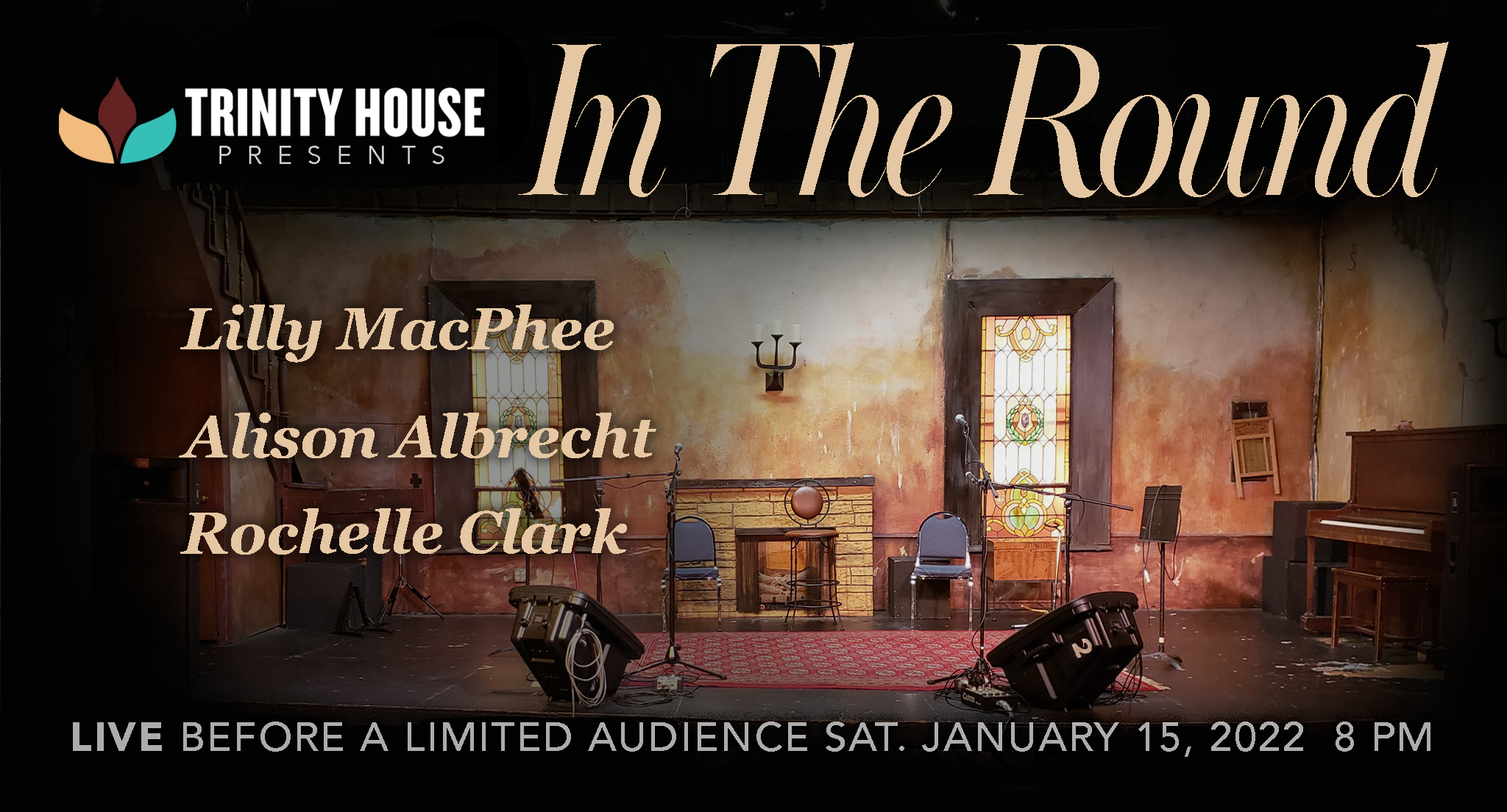 Trinity House in the Round returns for 2022 with an in theatre taping featuring Rochelle Clark, Alison Albrech and Lilly MacPhee.

A native of Michigan, Rochelle Clark’s music has been described as raw, honest, and beautifully vulnerable. She writes and sings about real life, joy, struggle and human tragedy – you can’t help but feel for the characters in her songs. Leaning heavily on personal experience, she connects on an intimate level that resonates with her audience. As one-half of the acclaimed Americana duo, The Potter’s Field, Rochelle’s powerful vocals have been captivating audiences in Michigan and throughout the Midwest for years. Drawing on her roots in folk, Americana, and country, Rochelle has found a sound that is uniquely her own.

​After feeling like she was in a creative rut, Rochelle set out to challenge herself by recording and releasing her first single, Jericho in April 2019. The experience was so positive that she decided the time was right for an EP. In January 2020 she released her first solo recording; an EP titled, In Time. This six song debut is a progression of songs that reflect where she is coming from and where she is hoping to go.

With a soulful voice and brilliantly insightful lyrics, singer-songwriter Alison Albrecht is blazing new trails in music. Her unique blend of pop and soul, plus a touch of folk, offers a wide audience appeal that lives not too far from the sound of Sara Barilles or Sheryl Crow.

​Alison is completely in her element onstage and has been performing across the state of Michigan since the tender age of nine years old. She has enchanted crowds as large as 30,000, singing the national anthem at Comerica Park, opened for the Steve Miller Band at Freedom Hill Amphitheater, and connected with audiences at renowned listening rooms such as 20 Front Street in Lake Orion and the Ark in Ann Arbor.

Alison was the first-ever Michigan State Fair Superstar Contest Winner, in 2014. Her 2015 debut EP, produced by Grammy-winning producer Chuck Alkazian, earned her a Detroit Music Award People’s Choice Award nomination and was named the Number One Local EP Release of the year by host John Bommarito of Ann Arbor’s 107.1 FM.

Singer/Songwriter Lilly MacPhee writes songs that are intimate, yearning, and ethereal. Her extraordinary voice will remind you of Dolores O’Riordan of The Cranberries. Her original song, “Cold” was selected as a semi-finalist in the prestigious International Songwriting Competition 2020. Her music has found an audience on radio stations such as 93.9 The River, Ann Arbors 107one, and 101.9 WDET. She recently performed at notable venues and festivals like Wildwood Amphitheater, The Michigan Theatre, 20 Front Street, and Burns Night Scottish Festival; as well as performed for charity events sponsored by Make A Wish Foundation and Miles For Medics. Touching the hearts of fans spanning from Detroit, Michigan to Dublin, Ireland with soothing vocals, delicate melodies, and poetic lyrics – Lilly MacPhee’s songs will warm your heart.