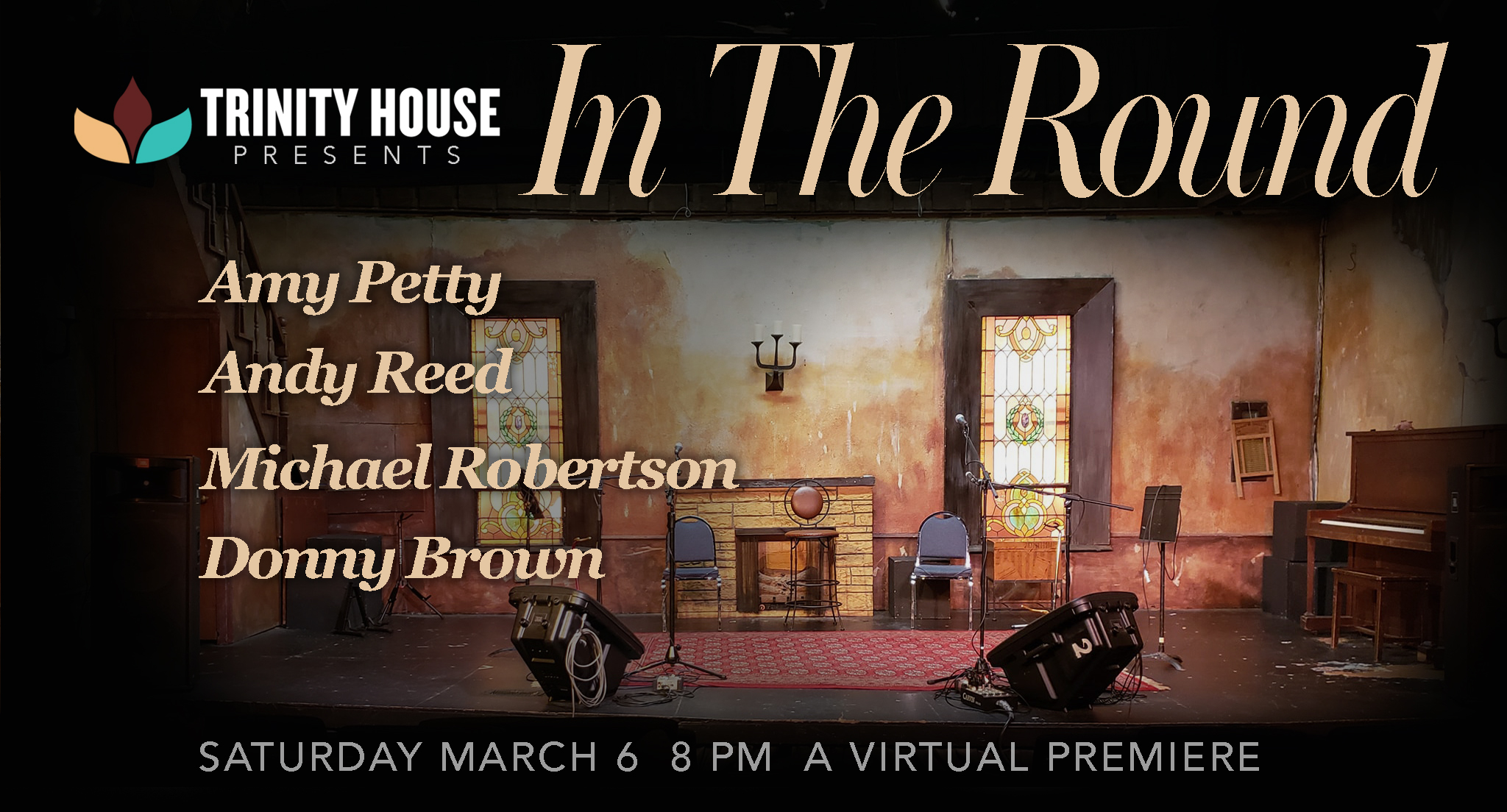 Last fall we recorded a special in the round concert featuring Amy Petty, Andy Reed, Michael Robertson and Donny Brown.  Amy is a Trinity House favorite and she brought together some of her bandmates and production team behind her critically acclaimed CD “The Darkness of Birds.”  The concert was filmed at Trinity House with the help of Doug Austin with assistance from Trinity House board members Terry Birkett and Chris Waterman.  Join us March 6, at 8:00 p.m. on our Youtube and Facebook pages.  Those who watch will have an opportunity to donate to support Trinity House.

Art, mystery, and spirituality influence and infuse her poignant, evocative and sensual songs. These sonic canvases showcase the heartfelt emotion behind her lyrics and provide a foundation over which her voice and choral harmonies soar.

Andy Reed’s foray into recorded music began in the late 1990’s when his Power Pop trio, The Haskels, made an album under the guidance of Brendan Benson, best known for his work with The Raconteurs.  The sessions not only resulted in the band being signed by Bullfrog Records, it officially gave Reed the recording bug.

Though Reed’s main focus for the last decade and a half has been as a producer / engineer, he has also continued his own career as a performer and recording artist.  In addition to the 250 recording projects that Reed has completed with other artists in the studio, he has also toured and performed with many of Michigan’s finest acts, including serving as the bassist for the Verve Pipe from 2009 – 2013.  He has also released several independent solo EP’s.  In 2016, European Power Pop label I Am The Cosmos released a “Greatest Hits” compilation, “An Introduction to Andy Reed.”  His “studio” band, The Legal Matters, is currently completing the follow up to the Omnivore Records release, Conrad.

Michael Robertson has a knack for recognizing irony in the nuances of unremarkable, yet universal, life experience. His songs blend Americana & rock flavors & his vocals have a tinge of weariness that fits the lyrics. If you ever needed an excuse to hop in the car and hit the open road, “All My Stories” will get you there, offering a display of roadside attractions of the human condition along the way.  He also performs with the Michigan based band the Lucky Nows.

Donny Brown is a highly-acclaimed songwriter and performer who was one of the founding members and principal songwriters of The Verve Pipe, an American rock band whose albums have sold more than 3 million copies worldwide. He also recorded, produced and co-wrote two highly acclaimed family albums for the band in 2009 and 2013 – both of which ended up on the iTunes Best Of Year lists.

Since his departure from The Verve Pipe, Donny has released two solo EPs — the Hess Street EP and 2015’s Eponymous EP. Both of these works received numerous favorable reviews and ended up on many year end music lists. Several of his original compositions have been featured on America’s Funniest Home Videos, Roswell, Dawson’s Creek and in the Tim Allen feature film Joe Somebody.

Recently, Donny has grown and expanded his musical talents into new creative areas. Today he regularly plays drums and sings background vocals with Amy Petty, Thornetta Davis, Michael Robertson and the Broken Hearted Saviors, as well as with The Legal Matters. He recorded both of the Legal Matters releases and is now in the studio working on their third release.

Donny is currently recording new songs for his third solo release which is due out in 2020.