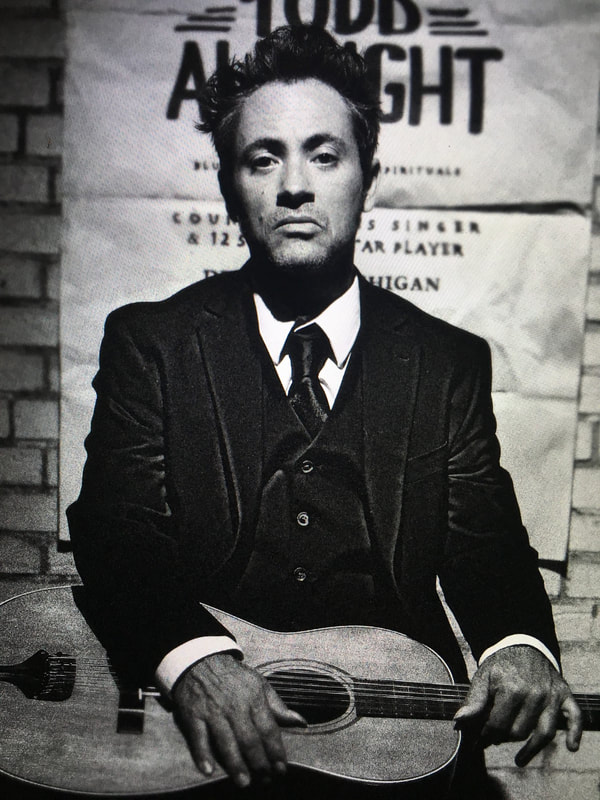 Todd Albright is a country blues, twelve string guitar player and vocalist based in Detroit, Michigan. Grounded in the pre-war era of the blues tradition (1880-1939), Todd is a mindful purveyor of blues history. His repertoire upholds musical pillars such as Blind Willie McTell, George Carter, Blind Lemon Jefferson and Leadbelly. His life’s work continues the distinguished tradition of the very roots of American music as told by the African American musicians who created it.

Todd’s vigorous, gritty and soulful performances are accompanied by stories of the masters and a deep intuitive sense of respect for craft, providing audiences with a meaningful experience while creating a transcendent moment. One of the top blues guitarists in the world, Todd is the only contemporary twelve string player in his genre.

Todd began playing the blues while still a teenager, some twenty-five years ago. Initially, he was drawn to the sound of the finger-picked style and has since immersed himself in the foundational music and narratives of American culture. Over the years, Todd has shared the stage with artists such as Roy Book Binder, Charlie Parr, Paul Geremia, and Dakota Dave Hull.

Danny Kroha will open the show.

Danny Kroha has recently been spending time learning and recording more traditional folk, blues, and gospel tunes from the public domain. His upcoming Detroit Blues could be considered part two of his debut solo LP, Angels Watching Over Me.

In his own words, “It was me in a room playing acoustic instruments and doing my own arrangements of some old songs.”

Not so fast, buddy! When you hear this record and dig a little deeper into the facts, you’ll have a heightened awareness of the sonic beauty found in the simplicity. On many of these traditional songs, Danny dropped, added or rearranged verses from various sources, mixing up music from one song and words from another creating his own amalgamation of early blues and country.

Keep your ears peeled for familiar and wild homemade sounds. There’s a DIY one string washtub bass made from a fire snake rail-heater that can found on some railroad tracks. There’s a lot of jug bass, blowing the bass notes over the jug opening, frequently heard in early rural American music but also with the 13th Floor Elevators, who ran their jug through an amplifier. The one string guitar, aka The Diddley Bow, on “Come Out Of The Wilderness” is rare, aside from Danny, one of the last times we heard one was on One String Sam’s “I Need A Hundred Dollars.” You have your traditional assortment of washboards, tambourine and other percussion instruments, but during one session, Danny and the album supervisor tried out several pairs of Danny’s work boots to find the best tone for the foot stomps. We’ll report back soon on what brand was chosen.

Instead of following all the rules rooted in early blues and old time country, Danny Kroha mixed up all the traditions and kicked out a new old sound that could really only happen in Detroit – “I listen to both genres, for sure. I just wasn’t TRYING to make a record that sounds like that. It just came out more like a field recording than a studio recording.”