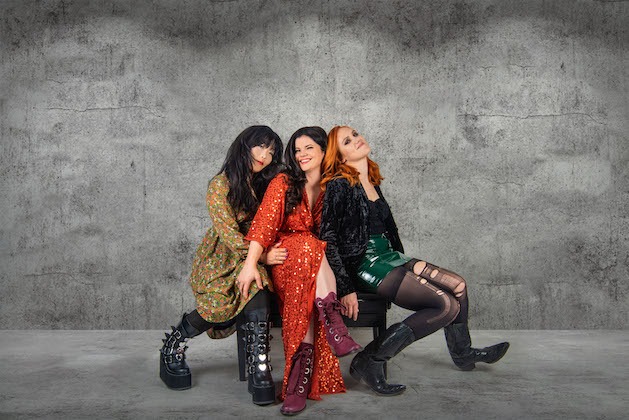 When Nobodys Girl (aka BettySoo, Rebecca Loebe, and Grace Pettis) began discussions with their label, Lucky Hound Music, about recording a full length album (a follow up to their critically acclaimed EP, Waterline), the idea to start with one new song, but maybe to do a few Christmas songs too was floated. That idea totally jived with their sensibilities and sounded fun, too. They chose two songs, Someday at Christmas, and Merry Christmas, Baby. Both tracks will be released digitally, worldwide, on October 25th.

“Wed all heard this song [Someday at Christmas] as sung by Stevie Wonder and the Jackson 5, says BettySoo, but I dont think any of us realized this song wasnt written by Stevie! It was a fun exploration for us to try to make it musically our own by letting the choruses soar in a new, hopeful melody with a different structure and dreamy harmonies. Grace adds, “I’d never really listened to the words of this song until we found it, while digging through possible Christmas covers. The Jackson 5 and Stevie Wonder versions are so upbeat and fun that it’s easy to miss the sentiment underneath, which is quite profound. We wrote a new melody and chord progression for a chorus section, to highlight that sentiment. Someday at Christmas is about dreaming of a better world for humankind, where men are free, even if we don’t think we’ll live to see it. Rebecca agrees: It is my sincere hope that someday this song is irrelevant, but for now it feels like a really good prayer for the 2019 holiday season.

“I love the B.B. King version of this song [Merry Christmas, Baby]. It’s so fun. It’s the perfect soundtrack to any Christmas party, says Grace, adding, I’ve actually spent years playing Merry Christmas, Baby at Christmas parties so I have proof! Our version has a vintage feel with a modern update. Its a little more laid back. Our version is the Christmas party at around 1 or 2 in the morning, when there are just a few people left, making out in corners and waiting on their Ubers. Rebecca adds, “I wasn’t very familiar with this song, but both Grace and BettySoo have sung it in the past and I fell in love with it instantly! BettySoo noted, “It was really interesting to discover some of the conflicted history of this super fun (and popular) song when we were deciding which lyrics we wanted to sing in our version. The set we used was adapted from what Smithsonian Magazine seems to regard as a version stemming from the original written by Charles Brown, a teetotaler.

The new original song they recorded, Kansas, wont be heard until we all know what the record actually is. There will be more recording sessions in September and January. In the meantime, on November 1st, Nobodys Girls version of Fast Car yes, the Tracy Chapman cover that basically launched them via some viral Facebook video action before they even went under the moniker of Nobodys Girl will be released digitally, worldwide. That video, since disappeared, has been re-branded and will re-appear this fall around the singles release.

“I’ve always loved this song, but it is even more dear to me now because it is the first song we ever sang together as a group, says Rebecca. “Funny story: When we decided to go on tour, we needed to make a video so promoters and audiences knew what we would sound like together. For that matter, we didn’t even know what we sounded like together! But we had a feeling it would be fun. Grace came to my house and we worked out an arrangement and sent it to BettySoo, who was on tour. When the day came, we met up at a friends studio and pulled out some iPhones to record video. Grace and I had never heard BettySoo’s parts until the first run through, and by then cameras were rolling. It was a really magical day and I’m so glad that we’ve got that moment captured.

BettySoo adds, “I heard this song for the first time when I was a kid sitting on my parents bedroom floor, watching on a tiny black and white set with UHF/VHF knobs. Remember those? Tracy Chapman was playing it solo, I think at the Grammys, and Id never heard a song like that before. Id never heard a story sung that way, a song that painted a picture of lives so simultaneously full and devoid of hope. It moved me so much and opened up an entire world of singer-songwriter music for me. And Grace remembers, ‘Fast Car is the first song we all sang together. It’s special for all three of us and we jumped at the chance to sing it together. Tracy Chapman is a genius. She bottles something in Fast Car that most women have felt; that most people have felt. Fast Car an anthem for anybody who knows what it feels like to try to get out of a small town or a bad situation; to try to make a better life for themselves.

Since Fast Car has that kind of history with Nobodys Girl, it just made sense to include it (with the Christmas songs too, of course) as part of the awareness campaign leading into their next release, tentatively scheduled for late May, 2020. In the meantime, they will perform more dates as Nobodys Girl and pursue their individual solo careers, being ambassadors for what they have created with Nobodys Girl at all times.

Hailing from Texas, Alabama, and Georgia, respectively, and now neighbors in Austin, BettySoo, Grace Pettis, and Rebecca Loebe have individually bewitched audiences with unforgettable songwriting for years. Friends now for a decade, they first met at the legendary Kerrville Folk Festival, each winners of the prestigious annual New Folk award there. Beautiful singers, effortless instrumentalists, and seasoned touring artists they recognized that what each can accomplish individually could be made all the stronger by this collaboration.

Originally, the band was conceived as a one-time tour; a chance for three friends & like-minded peers to travel and perform together for a few weeks. The of their Tracy Chapmans Fast Car, cover was hastily created to promote that tour before garnering over twenty thousand views on Facebook within days of posting. Coupled with that 20-city tour, the spark had been set, the fire lit. Upon their return, they quickly (within 36 hours) wrote some songs together and entered the studio with a core band of Austin all-star musicians: David Grissom (guitar), Glenn Fukunaga (bass), J.J. Johnson (drums), Ricky Ray Jackson (pedal steel) and Michael Ramos (keyboards, also the producer of the project) to document what theyd just created.

Delving into pop-rock and soul territory fully and deliciously, their pristine voices blend so well, its sometimes hard to tell whos singing what – even for them. The effect is like listening to sisters, until they trade off lead vocals. Then the distinctive, complementary elements of their voices becomes thrillingly evident.