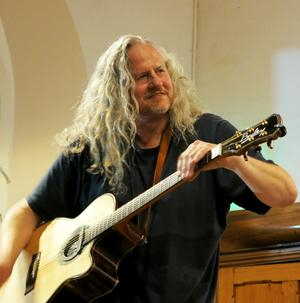 THE PRESTON REED CONCERT IS CANCELLED.  PRESTON LIVES IN EUROPE AND WILL NOT BE TRAVELING AT THIS TIME.  WE LOOK FORWARD TO WORKING WITH THE MICHIGAN FINGERSTYLE GUITAR SOCIETY TO RESCHEDULE THE DATE IN THE FUTURE.

Rulebreaker. Trailblazer. Visionary. Phenomenon. And yet, even the breathless plaudits of the world press don’t quite do him justice. When Preston Reed picks up an acoustic guitar, words will fail you.

To watch Reed perform is to witness the bending of reality. The New York master tweaks the nose of musical convention, pokes the eye of received wisdom and burns the rulebook of the past. Using an evolution of the two-handed acoustic technique he pioneered in 1987, he fuses chord-based grooves, soaring melodic runs and polyrhythmic percussion that integrates the breathtaking potential of the guitar body. The power and depth of his original compositions are as unique as the man’s execution, from his roots in blues, rock, funk and jazz to explorations in Middle Eastern and neo-classical styles, Reed’s music embraces familiar sounds in a fresh and original way.  Preston Reed doesn’t need a band. He is the band.

Over 30 years after his idiosyncratic style was born, Reed’s seismic global impact has created a sea of guitarists playing in his style, many of them inspired by 1994’s hit instructional DVD, The Guitar Of Preston Reed: Expanding The Realm Of Acoustic Playing.  Today at the height of his game, Reed’s recordings and live performances still define the sound of the pioneering compositional guitar genre he invented over a quarter century ago.

The studio is his playground, but the road is Reed’s natural habitat. This is a man in motion. His music represents a border-hopping universal language, and fittingly, tour bookings have drawn him across the planet, for performances that leave cultural ripples in their wake, from Europe to Australia, China to the US and beyond.

Reed’s musical journey has endless twists and turns, but there’s one distinct line in the sand. It was drawn in the summer of 1987, as the guitarist sat in his Minneapolis apartment and wracked his brain for a way to escape his musical rut. Until that point, Reed’s path had been familiar. As a child of the ’60s, he cites his earliest memory as The Rolling Stones’ hit The Last Time, whose classic lick led him to early flirtations with the ukulele and a grounding in basic chords courtesy of his father. He wrote his first song at eight – a number called The Lonely Night – before a course of regimented classical lessons wilted his passion.

But fate wasn’t finished with Preston Reed. At 15, the bug bit again, as Reed attended a Hot Tuna show in New York and was floored by the bluesy fretwork of Jorma Kaukonen. That night, his guitar was retrieved from the closet and took up permanent residence on his lap, with Reed drawing inspiration from acoustic legends like John Fahey and Leo Kottke, developing his own voice along the way. He was still just 17 when whispers of his talent buzzed through the music circuit following a live debut in support of beat poet Allen Ginsberg at the Smithsonian Institute.

Starting with 1979’s Acoustic Guitar, a volley of thrilling albums spread Reed’s reputation, and by 1988 he had signed a major deal with MCA.  But behind closed doors, the guitarist was frustrated. Though spellbinding by any standard, his playing had reached a plateau; his muse held in a stranglehold by the physical limitations of the instrument. Then the thunderbolt struck. Reed wiped his technique clean, stepped into the void and made his first attempt at the two-handed fretboard attack that would change his trajectory forever. Creatively and commercially, things would never be the same again.

If Reed were the type of musician to look back, he could reflect on four decades of glories, including gigs with Bonnie Raitt and Linda Ronstadt, burgeoning sales of his 16 (and counting) studio albums, sold-out venues across various continents, untold hits on YouTube and the praise of both the man on the street and fellow six-string pioneers like Al DiMeola and Michael Hedges. If he were a statistician, he might refer to the 1997 live satellite broadcast on Turkish television that saw an audience of 120 million in 17 countries flood the switchboards after his performance.

But Reed doesn’t deal in nostalgia. Some 31 years after he changed the face of the acoustic guitar, this trailblazing artist still tours and records with a passion that flows into the hearts, heads and feet of his audiences.

Preston Reed is an artist with a four-decade habit of defying expectation at every turn, nobody knows where his journey will take him next – not even the man himself. The one thing we know for sure is that it’ll be one hell of a ride…