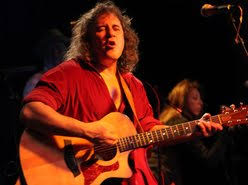 Michael on Fire has carved out an eclectic path as a musical artist, having traveled millions of miles, playing original music hundreds of dates a year all over the country, in every kind of environment. Along the way, he has attracted a loyal following that finds food for the soul in his words and music and his emotional expression.

From his beginnings as a songwriter and artist signed to Groovesville Music working out of Detroit’s famed United Sound Studios, to his earliest recordings with the Muscle Shoals Rhythm Section (“The Swampers”) at Muscle Shoals Sound, to his musical explorations with his progressive jazz group, Prismatic, to his time spent in L.A. and Nashville, gigging constantly and making records with the likes of Stephen Stills, Joe Vitale, and many other great producers and musicians, to his many years of non-stop grass-roots touring through every nook and cranny of the country, and right on through to his newest recordings, Michael On Fire has been relentless in his commitment to creative expression and musical performance. He is that rare breed that has lived his entire adult life, uncompromisingly, as a full-time musical artist, playing all original