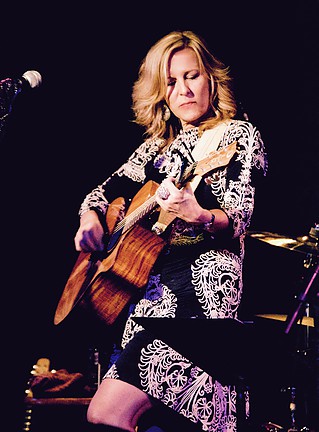 ​Julianne Ankley’s soulful country style hails from a small Michigan border town close to the shore of Lake Huron and within earshot of the musical influences of Detroit.

​Julianne’s 2020 Detroit Music Award winning single release “Why” from her new album  “With Love from Lake Huron” is out in digital formats  everywhere and the video can be seen on CMCTV, The Country Network Music Channel, and Youtube.

With thirteen Detroit Music Awards, including two 2021 DMAs for  Outstanding Country Recording for “With Love From Lake Huron, ” and Outstanding Country Vocalist, Julianne has been writing heartfelt songs and delivering electric performances, both solo and with her top notch band The Rogues, for years.  To date, she has released 4 albums and 4 singles with her freshman album “Vivid” garnering the 2012 DMA for Outstanding Country Recording. Her song “Lead Footin’ In the Left Lane” was used nationally by WXYZ (ABC) for the 2015 annual Woodward Dream Cruise televised special.  From her debut EP, “No Place For a Lullabye” was used by HomeAid of America for years in their PSA campaign to raise funds for housing the homeless. Julianne performed her song “Christmas In Your Heart” for the live, nationally televised “America’s Thanksgiving Day Parade” on WDIV (NBC).

​She’s been the celebrity host and performer for the Hard Rock Cafe stages in Nashville during the CMA Fest for several years, and continues to perform at Nashville’s top songwriting venues such as the world-famous Bluebird Cafe, the Listening Room, Douglas Corner Cafe, Tootsie’s, and more.