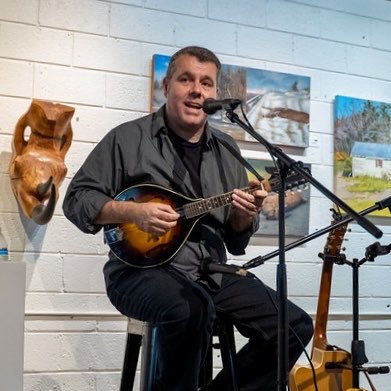 Jeff has graced Trinity House’s stage several times as both opening and main act, and counts it among his favorite venues. He’s especially eager and grateful to return after his last scheduled appearance, like those of so many others, was a “COVID casualty.”

He didn’t let the live music letdown become a creative slowdown: During the months of darkened stages, he continued to write and record music from his Dearborn bedroom bunker, and collaborated virtually with a friend on a song informed and inspired by the hard, heroic efforts of frontline health care workers. “Over and Over” took the top prize in the media category of the Take the Mic Contest, which was aimed at spreading community-generated messages of COVID safety and responsibility.

That song’s co-writer, guitarist George Luckey, will join Jeff on several numbers at Trinity House, along with another member of their band, Garrison Corner:  drummer Dan Houston.

Jeff is longtime songwriter and writer, as both a journalist and university communicator, who likes to say he lives “a life of words and music.” His experiences near and far inform his music, and the cadences of song creep into his professional writing. He also has written incidental music for social media pieces distributed by a global news wire and university.

He comes by his vocations honestly: His father is a retired music teacher and French horn player whose lengthy list of credits include the Detroit Symphony Orchestra and numerous Motown recordings back in the company’s Detroit heyday. He also joined Jeff at THT. His late grandfather was a pioneering publisher of newspapers, magazines and other content for the area’s Arab-American community. He pays tribute to them in his heartfelt and personal song, “Made by Motown.”

Jeff’s music has been heard on radio and TV stations across Michigan, as well as elsewhere in the U.S., Canada and the U.K. He has played across the Midwest and beyond, both solo and in support of such artists as Putnam Smith and Connor Garvey. His biggest audience was a capacity crowd at the Rose Bowl, though he hastens to add that this was when he was one of 300-plus members of Michigan State University’s Spartan Marching Band. Still counts, he says.

Bobby Pennock is an accomplished singer/songwriter whose style, albeit unique, is reminiscent of those celebrated folksingers of the 1960s and 70s, like Paul Simon and Harry Chapin (with a heaping helping of The Beatles thrown in), crafting songs that catch you off guard with lines like: “Don’t try to reason – a little thought might give you heed/You don’t need to be wise when pleasing all your wants/By disguising them as needs…” Listening to him perform is like watching a good magician. When it’s over, you can’t help but ask: How did he do that?

When not performing solo, Bobby can be seen on stages around and about with a band of songwriters known as Taller Than They Appear. You can visit this great band at www.tallerthantheyappear.com.  He is also available for session work and has added bass, guitar, and vocals to recording projects by several SE Michigan artists.