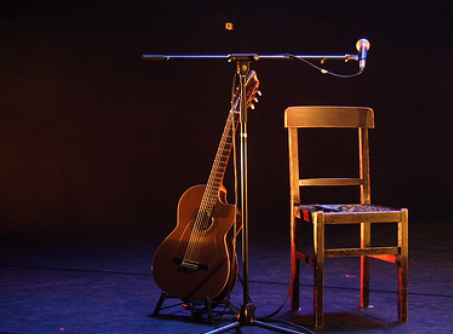 Not just another open mic show, the Empty Chair Night offers members of the audience a chance to join the hosts and featured act on stage to share a song “in-the-round” style.

The brain-child of Joel Palmer and co-hosted by Annie & Rod Capps, each month there is a featured guest artist.

Audience members who are interested in performing sign up at the door. A new name is drawn each round for up to 7 chances to share a song. Performers of all experience levels are welcome and encouraged.

Jenny is an award-winning singer/songwriter who garners international radio play with 3 studio albums and 2 live albums.  She has opened for Greg Brown, John Gorka, Sons of the Never Wrong, Steve Dawson, and Louden Wainwright III among many.

She is also the poet and photographer behind the Haiku Milieu series, encompassing three books, an audiobook, a soundtrack, the Sunday Haiku Milieu Email Club, and a concert series.

For the Haiku Milieu concert series, she invites fellow songwriters to write songs based on a photo and haiku.  She collects the songs as videos, and gathers them into concert “movies.”  The Haiku Milieu YouTube channel now features more than 100 original songs inspired by her haiku and photo.

When the world is not in quarantine, Jenny has has monthly musical residencies at FitzGerald’s, Hey Nonny, and Friendly Tap alongside her husband Robin Bienemann, who is himself an award-winning songwriter and Kerrville finalist. She teaches workshops and classes at The Old Town School of Folk Music.

This is a special Sunday night concert event.
Show time is 7pm!
Donations will be accepted.