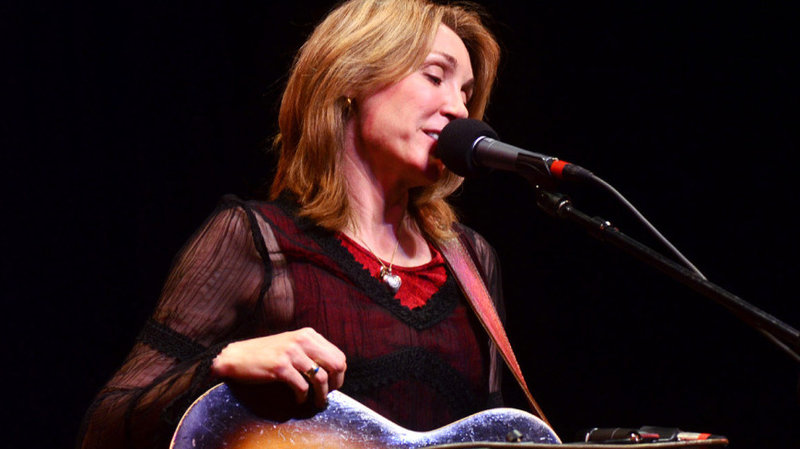 “Songs come in a flurry of inspiration. I don’t understand it but I’m grateful.” Award winning American singer-songwriter Diana Jones has been called the “Emily Dickinson of song” and “the female Johnny Cash” in reviews and rightfully so. But a journey of adoption and reunion as mysterious as her songwriting led to the gritty, authentic, Americana storytelling that has become her life’s work and the essence of her live show.

Adopted as an infant and raised in Long Island, NY, the fact that Jones couldn’t get enough of her brother’s Johnny Cash records finally made sense when she found her birth family and musical roots in the Smoky Mountains of Eastern Tennessee. “Live At Folsom Prison blew my mind,” Jones recalls. “Whenever I heard anyone country, like Johnny Cash or Dolly Parton, I wanted more but I just didn’t know where to find it.” Diana’s maternal grandfather, who had formed his first teenage band with a young Chet Atkins, was happy to pass on the culture and music that he loved to his granddaughter. Gradually Jones discovered an uncanny affinity for the Appalachian music of her ancestors and began claiming it as her own as she discovered her true artistic calling.

Song To A Refugee, Diana’s 6th solo recording gives voice to the stories of asylum seekers world-wide. Writing and recording this album was a challenging process in itself.

Says Jones, “The devastating election of 2016 had left me and many of my artist friends unable to respond creatively. During the spring of 2018 I landed back in New York after a tour with no new songs. I had admired Emma Thompson’s work as an artist and a humanitarian forever. After randomly bumping into each other twice in a park near my apartment we had lunch and Emma told me about her work with refugees and the Helen Bamber Foundation. I don’t think anyone could have called me out of my writer’s block the way Emma did and I began to write the stories that I found so devastating — one voice at a time resulting in a flood of songs.”

Jones enlisted Grammy Award winning composer and musician David Mansfield to co-produce Song To A Refugee and guest artists include Richard Thompson, The Chapin Sisters, Jason Sypher on bass, Glenn Patscha on piano and Will Holshouser on accordion. The anthemic single, “We Believe You” was written after the album was recorded and added with the help of Steve Addabbo (Suzanne Vega, Shawn Colvin) co-producing. Jones invited friends and folk icons Steve Earle, Richard Thompson and Peggy Seeger, to each sing a verse and Richard Thompson on electric guitar, Mark Hunter on piano and Joe DeJarnette (Museum of Appalachia Recordings) on bass.

Known for giving voice to dispossessed people from the past, Song To A Refugee, finds Jones looking into the wider world to shine a light on current issues close to her heart. From a woman walking miles to the US border carrying her child, to the young children separated from their parents fleeing their homeland, she gives an immediacy to the stories of our time while illuminating the more generic themes within. Song To A Refugee artfully considers the times we live in, speaks for those often without a voice and encourages a humanitarian response.

Jones concludes, “The work has everything to do with my own need to connect with others around this important issue. At concerts I invite a spokesperson from a local refugee organization to speak during the intermission. It’s amazing to see the audience ask questions and find out how they can help while their hearts are open. I think we all want to get involved and give each other hope.”

Annie and Rod Capps will open the show.

Songs about broken things and poignant little ponderings are delivered with a rootsy vibe, a touch of twang and a soulful groove. Annie and Rod are on a musical journey that began in 1982, culminating into a symbiotic sound that reflects their deep and intuitive understanding of each other. Annie’s disarming, earthy voice and solid command of her guitar are punctuated by Rod’s effortless, accompaniment and beautiful solo work. Together they weave unforgettable melodies that are at once intricate and sparse – musically completing each others’ sentences.

Over the years, Annie and Rod have done it all; from rock to musical theater and while they continue to draw from a wide range of genres and influences, what comes out is a hybrid sound all their own. Genuine and playful; effortless and endearing; this duo has been enchanting audiences in quality music venues, house concerts, coffeehouses and festivals throughout their home state of Michigan and beyond.