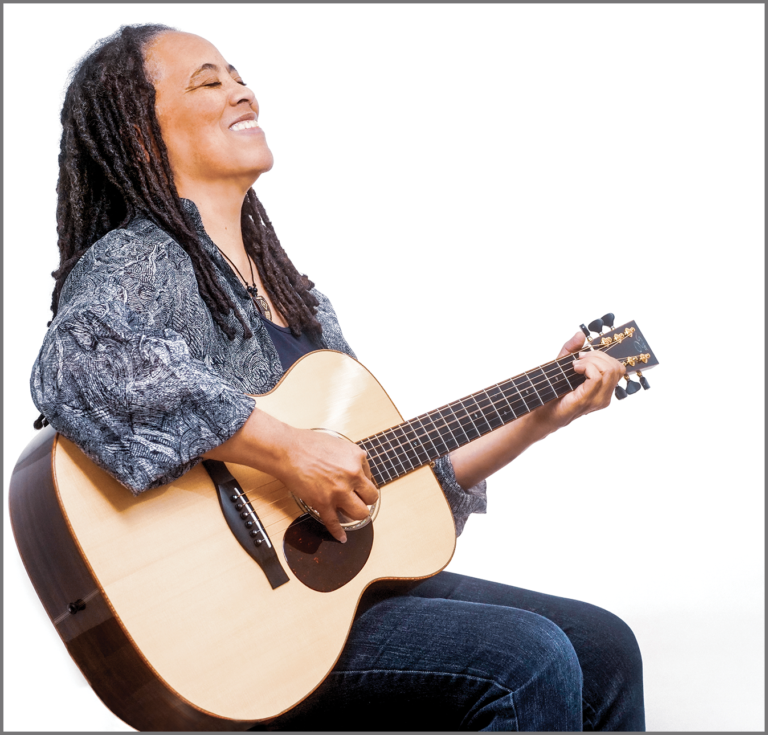 Deidre McCalla doesn’t merely take the stage – she owns it. Her songs embody hope and celebration, struggle, loss, and longing – sometimes all in one song!

A dreadlocked singer-songwriter-guitarist for close to five decades Deidre McCalla, Black woman, mother, lesbian, feminist, has long been in the forefront of the growing number of Black musicians reconfiguring perceptions of how Black folk do folk. With five independent albums to to her credit, including her most recent release Endless Grace, Deidre McCalla has touched audiences from Maui to Maine, church basements and college coffeehouses to Carnegie Hall. In 2021 Deidre received a SERFA Award from the Southeast Regional Folk Alliance for distinguished service and exceptional contributions to folk music in the Southeast region of Folk Alliance International.

The Austin-American Statesmen cites Deidre as “…a highly distinctive voice in a crowded field of contemporary folk music” and Sing Out Magazine lauds her CD, Playing for Keeps, as a work of “power, conviction and grace.” Deidre McCalla’s first Olivia Records album Don’t Doubt It is listed as one of 25 Classic Women’s Music Albums by Ms Magazine. Deidre McCalla’s music taps a variety of musical styles with Deidre’s vocal the connecting thread drawing the listener in with rich warmth and a feather-light depth. Her powerful songwriting exhibits an unyieldingly honest perspective grounded in her life and expressed with a lyric touch that is simple and direct and fearlessly celebrates the power and diversity of the human spirit.

Deidre McCalla came of age in the fiery blaze of NYC’s folk heyday – a time when Greenwich Village clubs were filled with the likes of Dylan, Baez, and Ochs; a time when Motown ruled the top of the charts and the streets of America screamed with anger and civil unrest. Her first album, Fur Coats and Blue Jeans, was released on Roulette Records when Deidre was 19 and a student at Vassar College. With a theater degree tucked under her belt and an acoustic guitar tossed in the back of a battered Buick station wagon, Deidre McCalla hit the proverbial road and never looked back. Deidre later majored in jazz guitar at the Wisconsin Conservatory of Music and released three albums with the pioneering women’s music label Olivia Records.

A much beloved performer in both folk and women’s music circles, Deidre McCalla has shared the stage with a long list of notables that includes Suzanne Vega, Tracy Chapman, Holly Near, Odetta, Cris Williamson, and Sweet Honey in the Rock. She has taught Performance at Warren Wilson College’s Swannanoa Gathering, and songwriting at Common Ground on the Hill. Deidre’s work has been published in Home Girls: A Black Feminist Anthology, The Original Coming Out Stories, and Chrysalis: A Feminist Quarterly, and she is featured in The Power of Words: A Transformative Language Arts Reader. Deidre is a proud member of AFM Local 1000 and the North American Folk Alliance.

From Dublin, Ireland and now living in Michigan, Enda Reilly’s shows delight, educate and entertain with fresh guitar and vocal arrangements of Celtic classics including The Lakes Of Pontchartrain, Danny Boy, The Foggy Dew, Caledonia and Red Is The Rose; Enda also shares his love of the Irish language and the poetry of WB Yeats through song, which engages audiences directly with Irish culture. Enda is a winner of the prestigious IMRO Christie Hennessy Songwriting Competition and co-writer of many songs with Aoife Scott including “All Along The Wild Atlantic Way”, which got to no.1 in Ireland.