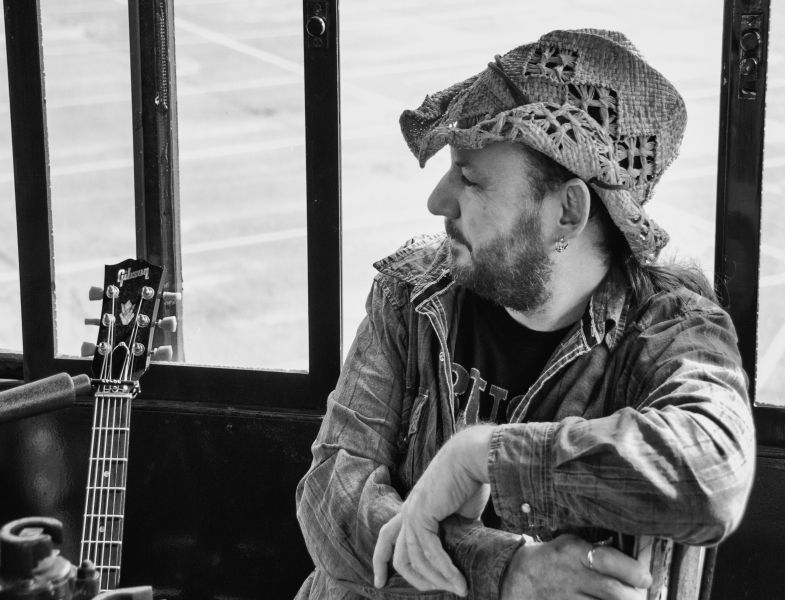 It’s no surprise that Buffalo, NY born and bred songwriter Davey O. has been described by Buffalo News critic Jeff Miers as having “a journalist’s eye for detail and poet’s ear for the well-turned observation”. Embarking on a decade-plus journey that has resulted in a collection of justly-earned, highly introspective songs, Davey crafts pure Americana that is not of the social and political consciousness, but drawn from the deep well of experience and human emotion – no hackneyed story lines, no insincere polish, just an unflinching poet’s look at life. The characters woven seamlessly into stories of which the song itself becomes the soundtrack for the movie playing inside the listener’s head.

Armed with a steady, rhythmic pulse on his Gibson guitar, a battered straw cowboy hat and a no apologies rust-belt work ethic, Davey puts rubber to asphalt, entertaining attentive, diverse audiences at listening rooms, coffeehouses, nightclubs, festivals, colleges and universities throughout the Northeast, Midwest, Midsouth and Atlantic U.S. – performances that result in engagement and communion between performer and audience through story and song.

In August 2012, Davey released – “Testing For Rust” which grabbed the attention of Folk & Americana DJ’s across the country, earning him top grades on the Folk DJ Charts. “Testing For Rust” debuted on FOLK DJ Radio Charts at #20, made the Top Sellers on CD Baby, hit the Airplay Direct Charts Top 50, and spent 11 weeks in the Top 25 on the Roots Music Report (RMR) for State of NY. “Testing For Rust” was also placed on the 2012 “Best of” lists by radio stations WVPE (Elkhart, IN), WHRW (Binghamton, NY), 90FM (Stevens Point, WI) and WMSC (Montclair, NJ).

In September 2014, Davey released a 7 song EP, “No Passengers”, co-produced by Neale Eckstein at Fox Run Studios in Sudbury, MA over the course of a day and a half. Like its predecessor “Testing For Rust”, “No Passengers” also captured the hearts of folk DJ’s around the country, debuting as a Top 20 album on the Folk DJ Charts for September 2014 and remaining a Top 25 Contemporary Folk CD on the Roots Music Reports for the better part of five months. “No Passengers” also received critical acclaim with inclusion on the “Best of 2014” lists of no less than six radio stations – WHRW (Binghamton, NY), WAMC (Albany, NY), WMSC (Montclair, NJ), Radio Crystal Blue (Tacoma, WA), WVPE (Elkhart, IN) and The Sundilla Radio Hour (Auburn, AL). “No Passengers” was also graded among the Top 100 Contemporary Folk Albums of 2014 on the Roots Music Reports, landing in the #25 position.

Davey built on the success of his previous releases with the 2017 release of his new, full length CD, “A Bright Horizon Line”. Joined by veteran folk artists Tracy Grammer (background vocals), and Pat Wictor (dobro), as well as up and coming artists Matt Nakoa (piano), and Eric Lee (mandolin, fiddle), “A Bright Horizon Line” is a collection of 10 tracks (9 original compositions, and a cover of the Crowded House classic “Don’t Dream It’s Over”) – each one taking the listener on an adventure via music and words, strung along the common thread of this journey we are all on. Co-produced with Neale Eckstein at Fox Run Studios, the production values and arrangements are clear, concise, and cinematic in their quality, successfully capturing the elements of both contemporary and traditional folk music.

Since June of 2020, Davey has been releasing new music in a digital only format via “The Share Project” , with all proceeds of these downloads donated directly to his local food bank, FeedMore WNY. Davey currently resides in the Buffalo suburb of Amherst, NY with his partner Sheila, their dog Addison, and their cats, Grace and Bigsby.

A native of Michigan, Rochelle Clark’s music has been described as raw, honest, and beautifully vulnerable. She writes and sings about real life, joy, struggle and human tragedy – you can’t help but feel for the characters in her songs. Leaning heavily on personal experience, she connects on an intimate level that resonates with her audience. As one-half of the acclaimed Americana duo, The Potter’s Field, Rochelle’s powerful vocals have been captivating audiences in Michigan and throughout the Midwest for years. Drawing on her roots in folk, americana, and country, Rochelle has found a sound that is uniquely her own.

After feeling like she was in a creative rut, Rochelle set out to challenge herself by recording and releasing her first single, Jericho in April 2019. The experience was so positive that she decided the time was right for an EP. In January 2020 she released her first solo recording; an EP titled, In Time. This six song debut is a progression of songs that reflect where she is coming from and where she is hoping to go.

Whether performing as a solo artist, in a duo, or with a band of exceptional musicians backing her, Rochelle’s shows spark joy, inspiration, and reflection.