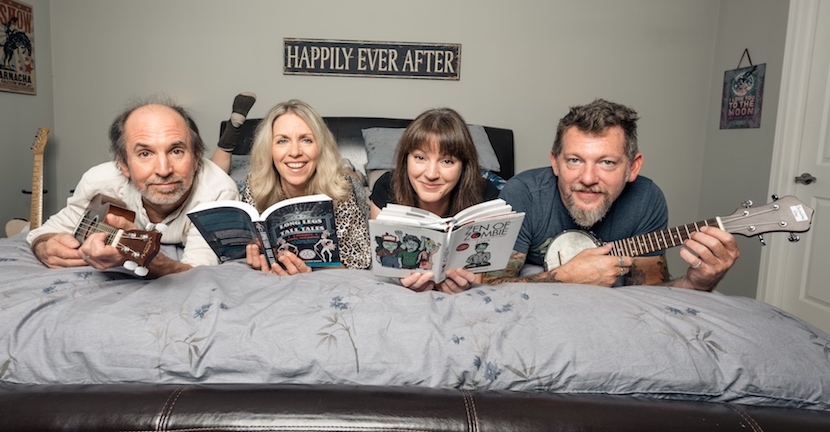 Close, comforting, and warm, Kristis voice slips in right beside Daves, creating an absolutely beautiful effect. Plus her charming and confident stage presence, along with her quick wit, are adding a whole new appeal to Daves shows.

Together they have performed at music festivals, listening rooms, and brewpubs from the Porcupine Mountains in Michigans Upper Peninsula all the way down to Oberlin, Ohio.

For the past two decades, Jason Dennies extraordinary and varied instrumental gifts have enriched Michigans music scene in uncountable ways.

Dennies bluegrass roots run deep. Growing up in Cincinnati, he recalls, My dad played guitar, bass and mandolin all his life; I loved hearing him play his favorite country and bluegrass songs. It felt like I could sense and absorb his connection to those textures, rhythms, that old-time music. If that wasnt enough to ignite a genetic legacy, Dennies maternal grandparents played in a bluegrass gospel quartet. From them, their grandson was steeped in Bill Monroe and Jimmy Martin songs.

After spending his teen years head-banging along with Led Zeppelin, Rush and Metallica, Dennie picked up an acoustic guitar at age 19 and found himself connecting with the complex interplay of melody and meaning in the music of James Taylor, Simon and Garfunkel, CSN&Y and Gordon Lightfoot. Leo Kottke, Michael Hedges and Alex Degrassi were further, deepening influences. Organically, intuitively, he began writing melodic lines, laying the foundation for a career in which the words Take it, Jason! today jump-start timeless, simple-to-pyrotechnic instrumental breaks that thrill listeners and inspire fellow musicians.

Dennie cemented his name as both a front and side man in the Cincinnati area, earning accolades for his work with Noah Hunt and Over the Rhine, opening for major artists (think Kansas, Arlo Guthrie, Janis Ian, David Wilcox, Sam Bush, and Darrell Scott) and winning multiple awards (think the Gamble Rogers Fingerstyle Championship) for his instrumental work in folk and bluegrass. Marriage brought him to Ann Arbor, Michigan in 2000; hes been there ever since. Today now equally proficient on mandolin he is one of the Mittens most sought-after musicians. His work with area luminaries including Annie and Rod Capps, Billy Brandt and the Sugarees, Jill Jack, STELLA, John Latini, Dave Boutette, and Chris Buhalis has led to six Detroit Music Award nominations.

But really, Dennies just getting started. After placing 2nd in the Telluride Bluegrass Festival Band Competition in 2011, he came to a realization.

I suddenly knew just how much my familys love of music meant to me, he says. I love every minute spent playing roots music and supporting other artists but I have so many original songs in my catalogue now, along with a handful of songs written with good friend Mary Pogge; its time to let them fly. Hes currently focusing his energy on Thunderwüde, an acoustic trio that takes Dennies original melodies and songs and weaves them playfully through guitar, mandolin/fiddle and upright bass. The bands first record, Live at Logan Street Sanctuary, was released in November, 2018. Dennie also enjoys a thriving side project with longtime partnerand renowned Michigan singer/songwriterRochelle Clark. The two often perform as a duo, or fronting a full band.

In addition to his musical life, Dennie is the proud father of two teenage daughters. He loves graphic novels, Halloween, and (recently) cats.

A native of Michigan, Rochelle Clarks music has been described as raw, honest, and beautifully vulnerable. She writes and sings about real life, joy, struggle and human tragedy – you cant help but feel for the characters in her songs. Leaning heavily on personal experience, she connects on an intimate level that resonates with her audience. As one-half of the acclaimed Americana duo, The Potters Field, Rochelles powerful vocals have been captivating audiences in Michigan and throughout the Midwest for years. Drawing on her roots in folk, americana, and country, Rochelle has found a sound that is uniquely her own.

In April 2019 she released her first single as a solo artist, Jericho. As she continues to explore her voice as a songwriter, she released a new EP in January.

Whether performing as a solo artist, in a duo, or with a band of exceptional musicians backing her, Rochelles shows spark joy, inspiration, and reflection.