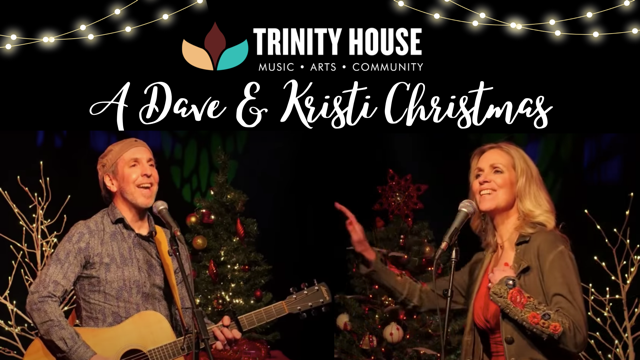 Join us for a special Christmas music celebration with two of our favorites, Dave Boutette and Kristi Lynn Davis.

Close and comforting, Kristi’s voice slips in beside Dave’s, creating a smooth and easy pairing. In addition their performances have been augmented by her charming stage presence and quick wit.

Together Dave and Kristi have performed at music festivals, listening rooms, and brewpubs from the Porcupine Mountains in Michigan’s Upper Peninsula all the way down to Oberlin, Ohio.

Whether knocking out a set of saloon songs at a Michigan watering hole, or settling back for an evening of singing at a fire ring afterward, Dave Boutette will hold listeners as long as they keep the lights on or until the rain starts. Stories, advice, observations, or raffles are as apt to appear during a performance as are his songs. If you get the chance, stand next to Dave. Besides feeling taller than you actually are, you may start to see some things in an entirely new light.

Before stepping out on his own, Boutette spent ten years with the Detroit-based alterna-rock bar kings The Junk Monkeys. The band toured the nation relentlessly sharing bills with such acts as The Goo Goo Dolls and Hootie and the Blowfish, while recording under the Warner Bros./Metal Blade label from 1990-93.

Before teaming up with Dave, Kristi Lynn Davis logged in about 1,200 performances and 240,000 kicks as a Radio City Rockette. She also sailed the globe as a singer-dancer on luxurious cruise ships and worked in musical theatre productions with showbiz icons Susan Anton, Buddy Ebsen, Maurice Hines, Jack Jones, Paige O’Hara, Juliet Prowse, Rip Taylor, and others.

Kristi’s had so many adventures in show business, she had to write a book to keep them all straight. Her award-winning comic memoir is titled Long Legs and Tall Tales, and folks of all ages are loving it.