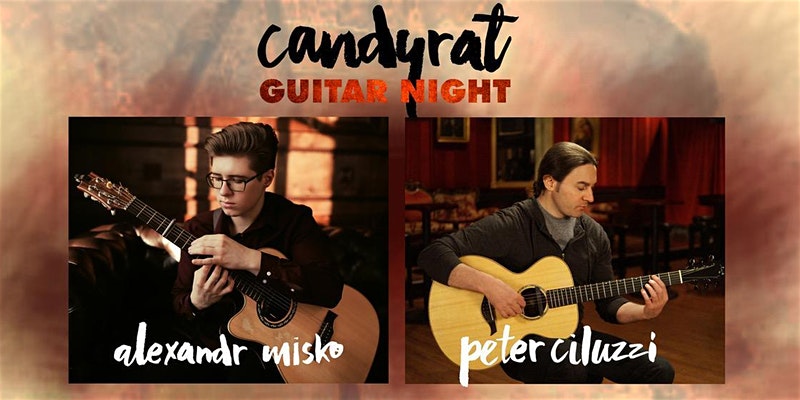 Alexandr Misko is a dazzling new breed of modern fingerstyle guitarist. The 21-years-old Russian already plays concerts all over the world and has often appeared on television in his homeland and other countries.

Drawing influences from the musicians who pioneered and expanded this guitar style, Misko manages to break through to new heights while never losing sight of the underlying music. He is a passionate and energetic performer who has released three solo albums.  With an organic approach, Misko’s work has been viewed over 200 million times on video platforms and has amassed more than 1 million followers of his music. In 2018, Alexandr was named the “Guitarist of the Year” at the prestigious UK Guitar Show. He has played notable concerts with fingerstyle legends including Jon Gomm, Mike Dawes, Luca Stricagnoli, Thomas Leeb and many others in his global tours.

Alexandr Misko is a young musician, composer and arranger from Russia, who has received world fame thanks to the Internet resource YouTube.

In 2015 his video with an original tune “Guitar & Pen Tapping Song” quickly gained over a million views, which was the reason for inviting him to appear on the well-known Russian analog of an American TV talk show “Jimmy Kimmel Live!”.

In January 2017 Alexandr Misko’s video cover of Michael Jackson’s song “Billie Jean” got over 33 million views on Facebook, which was the first big step to enter the world guitar scene and allowed him to perform on the same stage at the Guitar Summit showcase in Germany with such outstanding guitar players as Jon Gomm, Guthrie Govan, Tobias Rauscher, Maneli Jamal.

In December 2017 Alexandr released his second album “Beyond The Box” and the very first single from the recording (“Careless Whisper” by George Michael) gained more than 80,000,000 views within a month on Facebook and YouTube accumulated.

The number of Alexandr’s subscribers on his YouTube channel is growing exponentially and now has more than 500.000 followers.

Alexandr’s music story is amazing and simple at the same time.

He started playing the instrument at the age of 12 doing classical guitar with a private teacher for 3 years.
After becoming acquainted with the modern style of guitar playing called “Fingerstyle” on the Internet, he began to learn it on his own.

Since 2016 he released 3 studio albums and has been actively performing around the globe with solo shows, teaching, recording music, and in October 2018 he received the title “Guitarist of the Year” according to the noticeable UK magazine “MusicRadar”.

A unique style, a very musical and technical presentation, coupled with original works, make Alexandr’s music accessible to any listener. The language of his music is universal and understandable for audiences anywhere in the world.

Peter Ciluzzi’s music reflects his comprehensive approach to the guitar and his lifelong study of all things musical. An enthusiast and student of many styles of music, his output often defies easy categorization and reflects a diverse range of influences including jazz, bluegrass, and flamenco guitar as well as contemporary fingerstyle guitar; classical & electronic music and the study of orchestral composition; and traditional music from other parts of the world such as Brazil, India, and west Africa. In his own music Peter seeks to express the influence of these styles in a way that conveys his own compositional voice.

Primarily a self-taught musician, Peter started making music when he was a child. Inspired by the many musicians and performers that filled the streets of the Cape Cod town where he grew up, he began playing guitar at age 12. In his early teens he was drawn towards classical guitar and instrumental music and discovered the solo guitar work of Michael Hedges, Leo Kottke, and Pierre Bensusan; the manouche and flamenco guitar of Django Reinhardt and Paco De Lucia; the bluegrass fusion of David Grisman and Bela Fleck; and the genre-blurring jazz of guitarists like Egberto Gismonti and Ralph Towner. He studied the music of these and other visionaries, including the guitar works of Albeniz, Granados, and Villa-Lobos and the expansive orchestral sounds of composers such as Mahler, Delius, and Glazunov.

In the years that followed he explored other instruments including mandolin, piano and cello. Increasingly attracted to the improvisational approaches of great jazz musicians like Keith Jarrett and Pat Metheny, he studied jazz guitar and improvisation. Drawn also to the sparse electronic sounds of IDM and Glitch musicians, he has produced a number of electronic works.

Peter continued to compose and develop his guitar technique and entered a number of composition and guitar competitions. In 2007 he was a finalist at the Canadian Guitar Competition, and following that appearance he was offered a recording contract with Candyrat Records, an independent label that publishes guitar-based music from around the world. In 2008 Peter released “Music Without Words,” his first album of original solo guitar music; and in the years since, he has toured throughout the US and shared the stage with musicians such as Ewan Dobson, Pino Forastiere, Antoine Dufour, and Gareth Pearson. In addition to a number of new works in progress, Peter released his second solo guitar album “Still Without Words” in spring 2016 and is currently performing and touring around the US.

The broad nature of his musical interests also extends into the field of musical instrument design and construction. Having studied guitarmaking with Charles Fox at the American School of Lutherie, Peter founded Ciluzzi Guitars in 2006. He has displayed at a number of exhibitions including the Montreal Guitar Show and presently commissions and builds fine handcrafted instruments out of a workshop in Massachusetts.