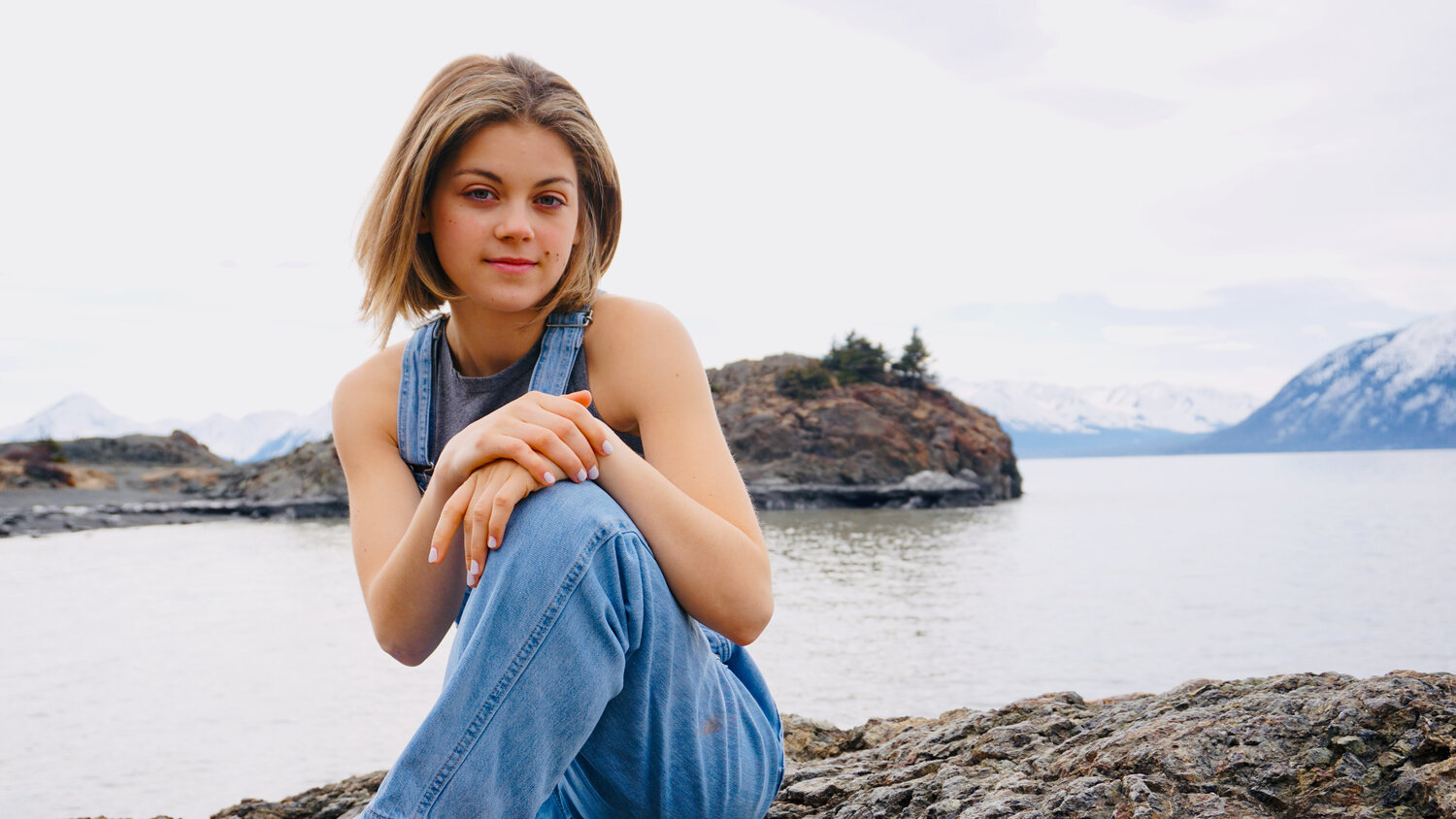 Before finishing high school, singer-songwriter Ava Earl has checked off many life dreams – opening for Maggie Rogers, playing music festival main stages, getting recruited to run track at Northwestern University, and releasing her fourth album, The Roses, released July 23, 2021. Having written hundreds of songs and performing on nearly as many stages, her creative output outpaces her years. She’s a person in perpetual motion, the finish line never quite crossed and the last note never quite hit. Her momentum, in step and song, doesn’t let down. “I’m addicted to writing songs. I don’t think I could stop if I wanted to” It’s the same with running, which in tandem, provides a cathartic release that allows her to sing about self-realizations and feelings that for many–no matter the age–are buried deep within one’s psyche.

Ava’s story is set in Alaska where she calls idyllic ice-capped Girdwood her home. She reflects on her earliest memories when she was encouraged to pick an instrument. She started out with the flute before finding her way into guitar. “The flute was the only thing I’ve ever quit!” Quitting doesn’t come easily for Ava.

But she stuck with guitar which has been the second voice by her side from her first recorded album of original songs at age 12, followed by increasingly polished albums over the next several years. The Roses is a continuation of this continuous thirst for music, expression, and lyrical wonderlands. The album, in its 10 track entirety, weaves through vulnerability with poignant passional lines like “sing me the song you sang me long ago / I didn’t know the words, so you told me” (“Do You Know Me By My Name”) and poetry sprinkled throughout, “She’s a flower, orange petals / she blooms in the sunlight” (“The Roses”). The songs and arrangements of harmonies, pedal steel, violin, and Earl’s guitar, dip into wonderment and aural escape, the words of someone who has evolved from shyness to emboldened maturity.

“I used to be really shy, I didn’t even look at my guitar teacher initially, poor woman!” This is surprising for the Ava we hear now, who approaches her favorite bands and sings about ex boyfriends, letting us know all about them between songs. She remembers when she started out at open mics, and listened in wonderment at musicians whose banter was deeply personal, never thinking years later she would be talking about getting dumped, and finding the fun and power in storytelling. “I’ve found the joy in self acceptance to say whatever I want, and I’m still learning how best to do that.”

Statements, sharing, and at times “oversharing,” have evolved into a voice that fearlessly speaks out. Ava recently joined The Anchorage Youth Vote, where she engages in civic engagement and awareness campaigns, like putting together a PSA about the Equal Rights Amendment. Compelled to use her voice to talk about issues Ava is unafraid of singing about disparities and topics that veer into the political, “Oh, you foolish man / You think you run the earth / Because your tired Hands / Have made castles from the dirt.” (“Up Here In The Sky”) She explores these narratives while discovering her own truths.

In terms of the ambient sounds that tuned Ava’s ear, Ingrid Michaelson’s Be OK has consistently been a favorite album, along the voices of Fiona Apple, Laura Marling, Elliott Smith, Ben Folds, and Taylor Swift. Earl has always been drawn to powerful lyrical storytellers, which has weaved into her own lyrical consciousness. Endlessly inspired by and propelled by community found through music, Ava has always put herself in spaces to find and nurture that inter-musical connection and camaraderie. She first experienced this warmth at the Under-21 open Mic in Anchorage, a space that has held emotional importance where she recalls getting her performance jitters out early on and making friends with other young singer-songwriters. It’s the confidence that she developed on that stage that prompted her to approach musicians at merch tables after shows, like JT Nero and Allison Russell of the Birds of Chicago, one of Earl’s favorite bands. When Ava was at the top of the line, an Alaska local told JT and Alli, “You should know about her!” pointing to Ava. This little comment spurred a musical mentorship – Ava has now been sending her music to The Birds for years. Always impressed by her talent, the day came when JT proposed the idea to produce her next album, which would become The Roses.

JT provides insight on the album’s inception, “Just before the world turned upside down, Ava traveled some 4,000 miles to Nashville to record a new album. Over the course of three days, “The Roses” was born. This song suite is another leap forward for the “veteran” 17-year-old, revealing a melodic intuition that places her in a lineage with Carole King, Joni Michell, and Laura Nyro — women whose emotional wisdom and voices rang true in turbulent times. Ava is just getting started, but The Roses gives us a glimpse of a young writer, singer, and player stepping into her full powers. It was thrilling to witness, and it’ll be a joy to see this music make its way in the world. Look out!

With the release of The Roses, Earl feels a strong fervor and assurance while still building on her path of self-discovery. And now, with a sense of spunk, she has no problem telling you who she is and why you should listen. “Hey everyone, pre-save my new song” she chimes during a track warm-up. “Why would you self-promote like that?” a teammate challenges. She laughs, “why would I NOT self-promote like that. Of course I’ll self-promote, so pre-save my song, Griffin.” And he did.

Heather McCorkle will open the show.  She’s a songwriter from Plymouth and will be a student at Grand Valley State University this fall.  This year she’s recorded her first few songs, and her first single, “You Stayed,” has received airplay on local radio stations.