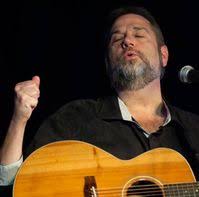 Many know Matt Watroba as the voice of folk music in Michigan for his work with WDET–Detroit Public Radio. As producer and host of the Folks Like Us program, and the nationally syndicated, Sing Out Radio Magazine and Folk Alley, Watroba has come in contact with many aspects of folk music and culture. This has helped shape a repertoire and presentation that is unique on stages across the state and country. He is committed to inspiring the world to sing– one town at a time. In 2019, Matt, along with his life-long musical partner Robert Jones, Co-founded the Detroit Non-Profit, Common Chords. Also in 2019, Matt Was inducted into the Folk DJ Hall of Fame at the Folk Alliance International conference in Montreal.

Matt is celebrating his new CD, The Far Si: The Si Kahn Funny Song Sing-along Songbook.  He’ll share songs from the new CD and lead the audience in a Community Sing.